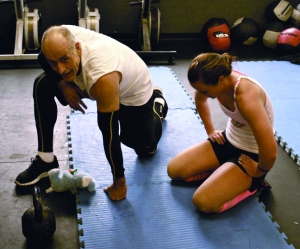 Thomas Wolfe wrote about ‘The Right Stuff’ in his book on the astronaut program. He focused on that particular quality that made someone capable of doing what so many others couldn’t imagine doing. It was beyond courage or bravery, it was the calm belief in yourself to rise to the challenge, to not back down, to step forward when others would step away.

Very few people become astronauts and live the life that Wolfe wrote about but that doesn’t mean that the Right Stuff isn’t in all of us. The problem is not so much that we don’t have it, its just been buried too deep. The Right Stuff is not laying on the surface in most of us. It needs to be pulled from beneath the comfortable surroundings of a life too easy. It won’t be found channel surfing or buying take out dinners. It isn’t hidden in the cushions of your sofa or in the glove box of your luxury car.

The Right Stuff exists in struggle. It needs to be worked at and respected. It needs to be put to the test. You need to be challenged by it. We enjoy comfortable lives and it is easy to make comfort a goal and a standard to measure difficulty against. If its easy then its good, if its hard then its bad, has become an accepted mantra.

To find that Right Stuff in ourselves we need to be challenged. For most of us we are going to have to seek out our own challenges and sign up for the opportunity to push outside of our comfort zone. Physical challenges are our modern arena for facing the unexpected and finding the courage to step forward.

There is so much to be gained from facing a challenge that you think may be more than you can do but still going ahead and doing it. The Crossfit Open Competition is providing that chance to many of my fellow athletes and I’m delighted and filled with pride as I watch them take on these unknown workouts each Friday for five weeks. They push themselves to the limits of their endurance simply to face the challenge. I watch them dig deeper than they thought they could to do just one more repetition, to know that they held nothing back, to prove to themselves that they were up for the challenge. Each of them searches inside and discovers that they do in fact have the Right Stuff and learn a bit more about what they are capable of.

You don’t have to be an astronaut to soar, you just have to believe in yourself and be willing to commit to living life at 100%. The Right Stuff is waiting for you.